THE POWER OF THREE - The Story Of Ford Three Cylinder Tractors 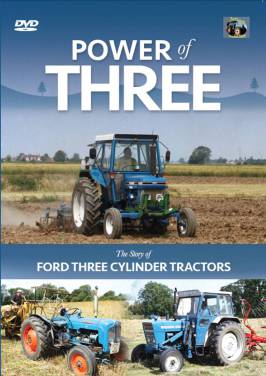 In 1957 the Ford Motor Company launched the Fordson Dexta; a small tractor aimed at a different market to the bigger Major already in production since 1951. The Dexta was novel in that it featured a three cylinder diesel engine - the success of which led to a line of tractors stretching over four decades.

By 1964 a whole new Ford tractor range included no less than three tractors featuring a three cylinder motor, inlcuding the best selling Ford 4000. No other tractor manufacturer embraced the power of three to the same extent as Ford and the success of the 4000 model and its successors proved they were right!

In this programme we see why the Dexta came on the scene and trace the successive generations of three cylinder powered Ford tractors as the 1000 Series gave way to the 600 range and then the Series 10 models. The story finally ends in the 1990s as the 30 Series brings to an end a fascinating three cylinder legacy.

Often over-looked, taken for granted or simply forgotten, this programme pays tribute to a unique and superbly engineered range of tractors - machines that were used all over the world and for a mind-boggling amount of different tasks. Conversions of these machines by County and Roadless also feature as do some highway versions and some rarer incarnations.